Twenty-seven organizations responded to our invitation to share cases for MeasureD, with a total of 31 projects submitted for review. We conducted interviews with all submitting parties, identified 12 projects for further investigation, and chose eight for inclusion. The criteria used for selection is outlined in the About section of this site: we looked for evidence that the social design process was deployed for a significant portion of the initiative; that the overall goal addressed either cultural or behavioral determinants of health, or clinical health; that objectives for the initiatives included behavior change or systems change; that measurement was used; and that access to participants and documentation made it possible to create a full enough picture to serve as a useful example. All original case submissions can be viewed here.

This was not a traditional case study methodology that posed research propositions and then investigated them through data collection. Rather, we conducted these cases to describe and explore the use of social design in social impact interventions and the integration of measurement into this practice. We learned, from conversations that took place at the MeasureD Symposium in 2017 and from discussions in our varied peer networks since then, that design’s influence on health and the roles measurement plays in it have not been fully investigated, documented or understood. Thus, we set out with multiple goals: to uncover the ways in which design’s contribution is currently evaluated and the roles measurement plays in design-influenced social programming; to capture learning to date; and to posit the ways in which measurement can be used to make design, in the context of social sector programs, more effective.

We conducted extensive interviews with multiple participants in each of the projects featured here; with designers, funders, implementers, internal and external evaluators. We reviewed the documents and documentation supplied, as well as any ancillary materials available. Content appearing on this site has been reviewed and approved by the individuals and organizations that submitted it.

Much of our own learning through this process has resulted from making the tacit knowledge and assumptions of the two very different disciplines we represent — design and evaluation — explicit. We discovered, through our conversations, differences as well as parallels in language and perspective that became evident only because we needed to rationalize them in order to understand what we were seeing. These investigations of our distinct mindsets were not only useful to us in representing the work included here from a more holistic perspective, but we also believe they have contributed to a more complete picture of the different (and similar) ways designers and evaluators think, speak and practice.

The original call for cases included these questions, in addition to a brief description of the health challenge the initiative addressed, and the ecosystem in which the work took place.

A Working Framework for What, Why, and How to Measure with Design

Below is an overview of the roles that measurement plays along the continuum of the design process, the value it provides in the form of questions it can answer, and possible methods for measuring for each role. 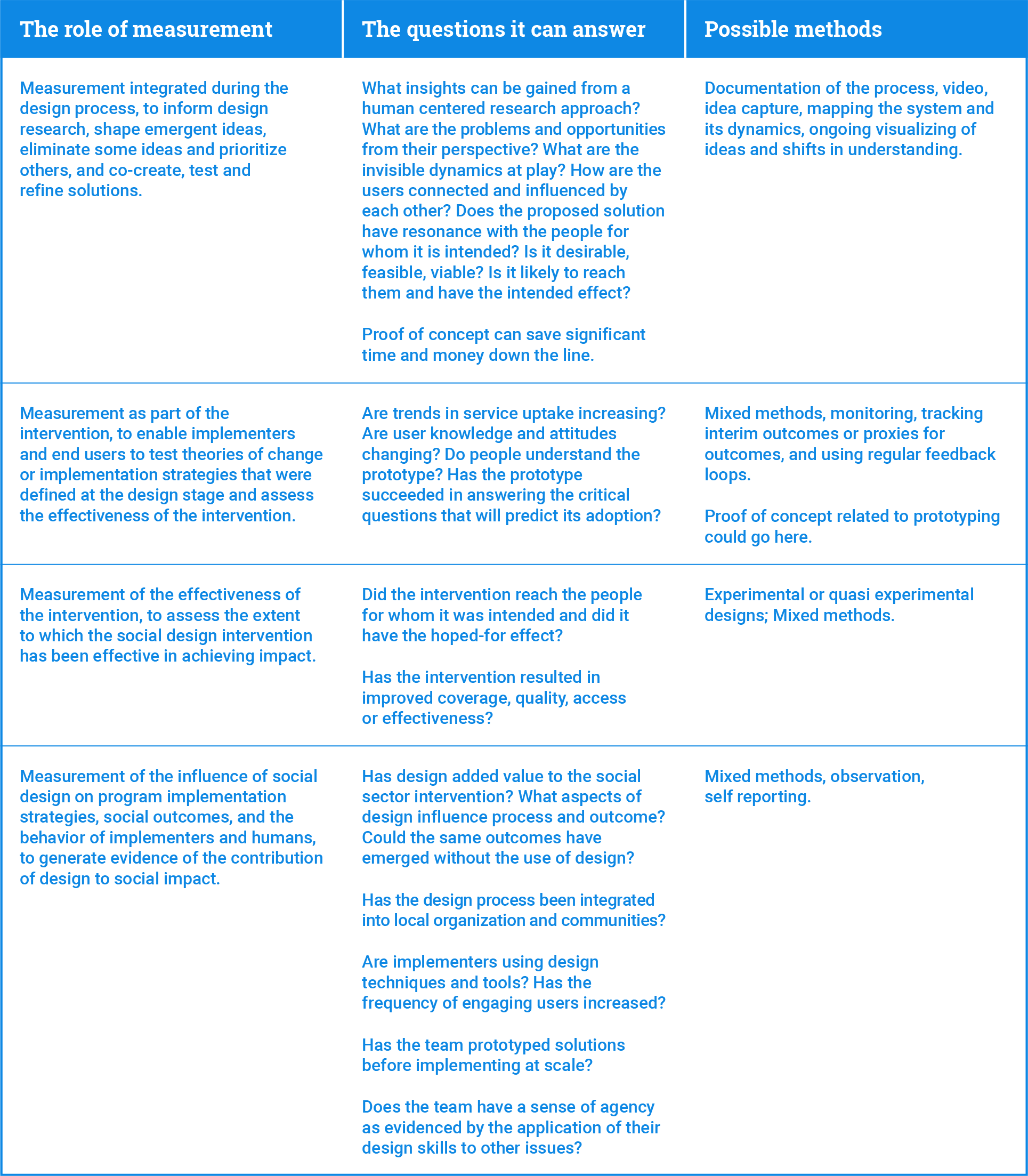 While diversity and relevance among the chosen projects were an important selection criteria, the unique lessons of each example were discovered only after much investigation.

The more deeply one studies the work of the Built for Zero team and communities, the more impressive it becomes, not only because of the intelligence and effectiveness of their approach but also because they keep improving. A recent podcast, hosted by Malcolm Gladwell, “shares the story of how Built for Zero communities are defying old assumptions and showing that homelessness is a solvable problem.”

The brilliance of Built for Zero is the way they have embraced the use of data as an integral component of their process. Active measurement, requiring constant vigilance, keeps seventy-four (and counting) communities across the United States focused on the same North Star—functional zero Veteran and chronic homelessness—accomplished by empowering communities and their citizens with actionable data. These common indicators, shared among all communities on the Built for Zero dashboard, are used to keep the work on track, getting relevant information out in a timely way. They are also used to set a real context that becomes the basis for innovation in addressing the issues uncovered. Communities are taught to use the design process to develop ideas and solve problems, based on these real-time metrics and measured against them. The dashboard provides a picture of progress at the community level and also shows a comparison to the rest of the country at a meta level.

One surprising lesson from this case is that counter-insurgency techniques, developed by the Army Special Forces, and social design are actually similar approaches using different language. Instead of the traditional law enforcement approach to ending gang and drug related violence, which is to arrest the criminals, the C3 approach works from inside the community to strengthen it, using human-centered research, co-creating solutions, prototyping and building will and capacity among residents to take back their neighborhoods.

C3’s prototypes are not fancy storyboards or user interfaces. Instead, they are experiments, with people, like a “walking school bus” a community escort that gets children to school safely in neighborhoods that were too dangerous for them to walk alone. Yet they solve the same purpose as the more familiar tools designers use: they provide real time feedback on the viability of an idea so that it can be modified and refined in use.

C3 measures the effect their work is having in three ways. In weekly community meetings, every issue, from near-arrests to a broken street lamp on a dangerous corner is surfaced and discussed; the number and types of crime are recorded regularly in public police records, and a long-term study investigated other indicators of community health like real estate prices, and the amount of graffiti (an indicator of gang activity). 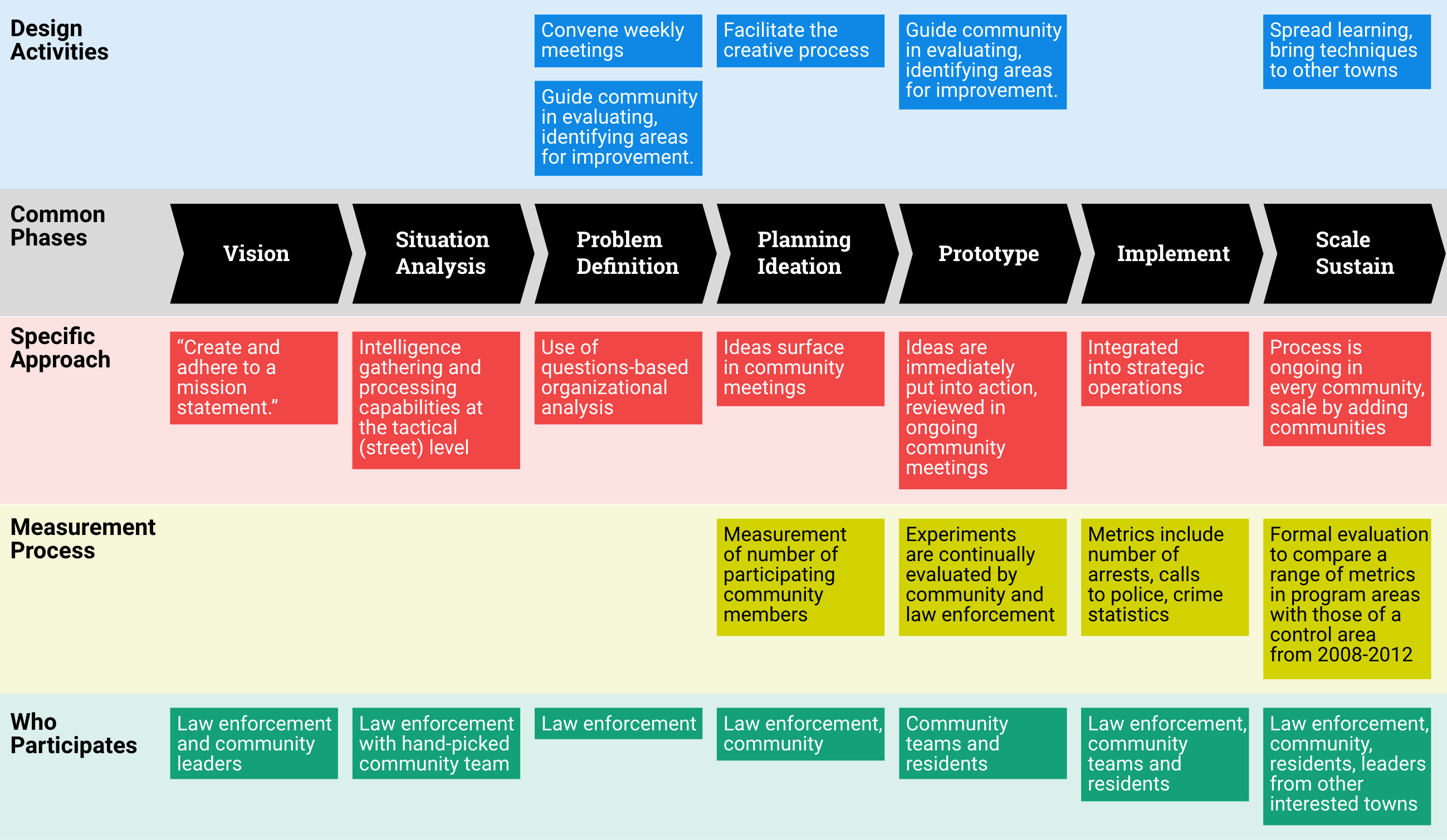 A360 is the most “examined” case included here. It is the only instance where the objective of measurement was to understand whether a design approach improved outcomes, in this case improved uptake of reproductive health services among adolescent girls. The implementers and the evaluators followed the whole of the intervention: baseline, midline and endline, monitored how the process was working, and how the way the process was being implemented was affecting the intervention and the outcome. The design, implementation and measurement teams worked closely together to understand and learn how to integrate design, global health practice and measurement in effective ways and are actively sharing their learning here and through journal articles. 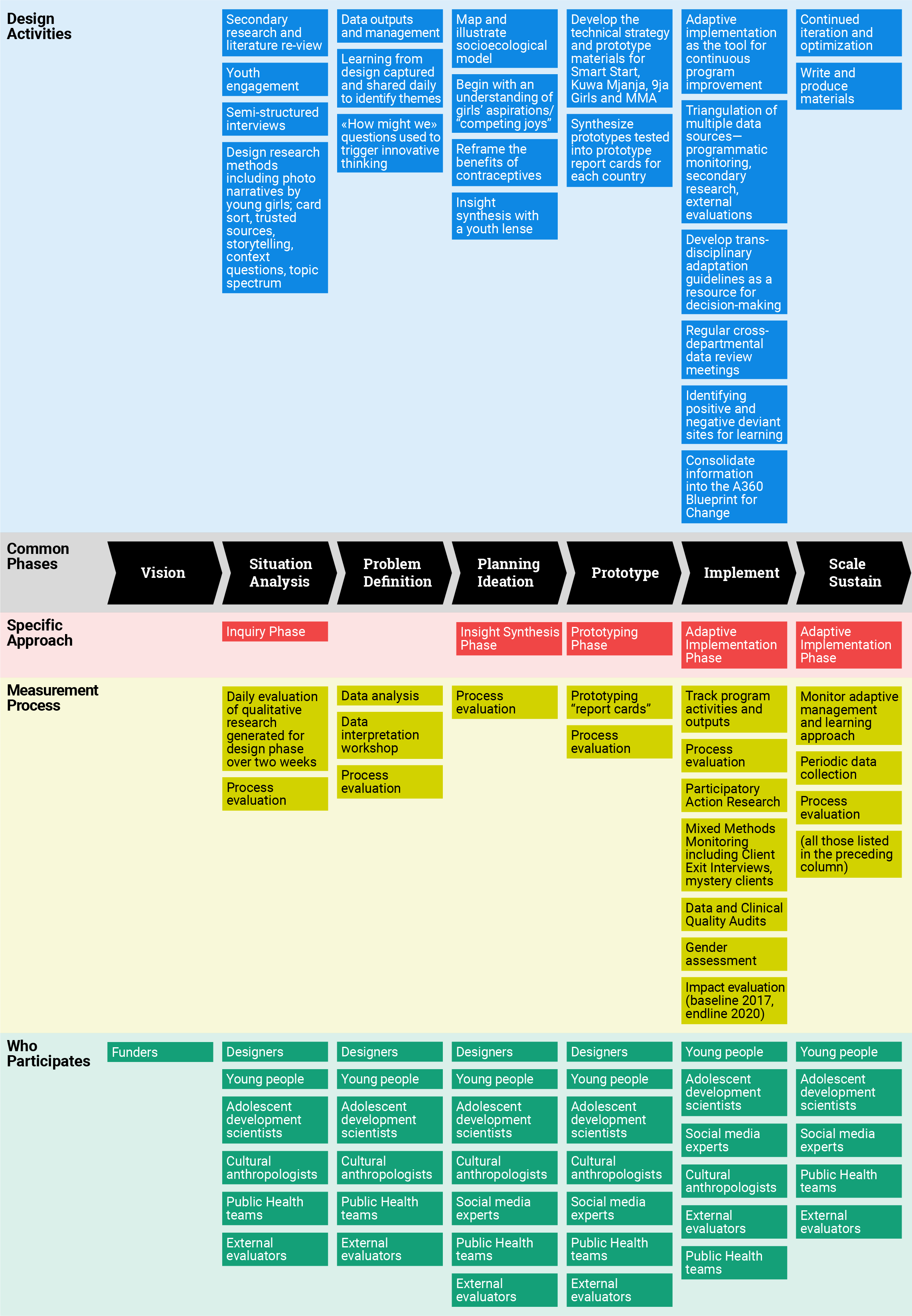 A relatively small project, and one that has yet to be completed, this case includes an interesting insight, however, that is relevant to any organization susceptible to unexpected budget and direction changes. Chelsea Mauldin, Executive Director of the Public Policy Lab, has developed a method for including a “proof of concept” at the end of each design phase. In this way, even if the project is paused, a case for its potential effectiveness has been documented. This makes it more likely to be continued, and also means that, even if the direction is changed due to external circumstances, the new direction benefits from learning accrued.

Kristen Hughes, the designer behind Fitwits, believes that the strength of the program is due to her training as a communication designer. Its inception was an assignment, from a group of doctors, to “fix” a failing interface intended to entice children to record what they ate. It was Kristen’s “children-centered” approach that uncovered the potential to go beyond recording consumption, but open up a world of potential to engage young people, their teachers and families in a gamified program to not only increase their understanding of the role food plays in health, but to make them champions of change in their classes and home lives. Hughes believes that another aspect critical to the enormous traction the program garnered was the luxury of time, to build understanding and trust, throughout the ecosystem of stakeholders involved. A key lesson is that this designer-founded and led project did not build a sustainable business model into its design from the start, and was never able to successfully separate from the university where it lived to become a stand-alone organization.

In this case, design research, and its consideration of the agency and needs of every stakeholder, was the impetus for the project’s expansion — from a more efficient method for recording pregnancies — to a robust suite of mobile technologies fostering supportive dialog with mothers to improve their health. It is an excellent example of how social design, in tandem with technology, can address the human dynamics that make new technologies successful.

This project shifted the perspective, and the strategy, of the Hennepin County Medical Center to a “journey-based” model of care where the health of complex patients (those with co-morbid conditions) is viewed not as an end-goal, but as a journey, along which patients can be moved toward better care in incremental steps. Geographically contained in one county in Minnesota, and focused on a specific patient group, the case provides insights into a deep and thorough process with application at larger scale.