A community-led system for ending homelessness in the U.S.

How might we design an accountable system for ending chronic and veterans homelessness by helping communities build the skills to transform existing well-intentioned but chaotic activities into a functional system?

Built for Zero is a program led by Community Solutions, founded by Rosanne Haggerty. It is comprised of a national team and peer network that support community participants in developing by-name, real time data on homelessness, optimizing local housing resources and tracking progress against monthly goals. Rather than promoting a single solution, they focus on teaching local teams how to use data to establish an accountable “system” for ending homelessness.

The shared data allow local teams made up of organizations working on the issue, to develop system improvement ideas and practice design and solutions skills in response to the specific conditions driving homelessness in their community. Measuring the impact of these tests helps communities continually identify and accelerate successful strategies. The organization has been called a “Field Catalyst,” meaning one that “amplifies the efforts of many others in the field.”

While Human Centered Design is one of three pillars for its approach, Built for Zero fully integrates the Mindset, Process and Skillsets of social design throughout. Traditionally, efforts to end homelessness are disconnected and in many places, have been ineffectual. Built for Zero is unique in a number of ways: its systemic approach; innovation of by-name, real time data on those experiencing homelessness; the formation of diverse teams in each community that bring together all relevant stakeholders; and guidance and coaching on how to find solutions that end chronic and veterans homelessness in response to their local data. Convening two to three times per year they bring communities across the country together to develop and share learning; provide additional skill training in data analytics, quality improvement and other problem solving skills, and assist community teams in planning their next cycle of improvement tests.

“There is power in the peer network. as well as in the coaching. This is a movement where people take energy and confidence from being part of something that’s beyond their own community’s effort.”

The Built for Zero initiative continues the momentum of another Community Solutions project called the 100,000 Homes Campaign — a national movement that helped 186 participating US communities find homes for 105,580 homeless Americans in four years. An important learning from the 100,000 Homes Campaign was the need to count down when tracking homelessness, not up. In counting up, while the objective was met, the number of people experiencing chronic homelessness nationwide was not reduced by a corresponding number. This highlighted the needed for a comprehensive, accountable system, attuned to the dynamic, shifting nature of homelessness itself.

Amount of Design: End to End

Measurement and Built for Zero

“If the Systems Problem is as essential as we believe, then data-driven iteration and refection are essential to progress, and in fact, they may be the most critical tools in each community’s work to end homelessness.”

The Built for Zero team introduced a new, standard metric of success, which reflected their own criteria for measurable and sustainable success – functional zero ‘homelessness’ for veterans and ‘ending chronic homelessness’ – rather than defaulting to the standard government definition of program success: the prevalence of homeless people at an annual point in time survey.

A community has ended chronic homelessness when the number of people experiencing chronic homelessness is zero, or if not zero, than either 3 or .1% of the total number of individuals reported in the most recent point-in-time count, whichever is greater. This definition is the same one used by the Federal Government.

Number of homeless people housed
(need to confirm this).

Inherent in the Built for Zero approach is linking data or measurement with people (each homeless person was tracked by name) routine (monthly) community self-assessment and problem solving, thereby giving responsibility to communities to use data to drive adaptation in the program design. Deemed a ‘revolutionary’ ability to track and response to chronic or veteran homeless comprehensively.

“Because it is impossible to predict who will become homeless or how the problem itself may change over time, there can be no fixed recipe or solution, only promising practices and approaches brought together in shifting, context-specific combinations.”

Data is the tool to hold a community’s implementation strategies accountable as well as the communities themselves for driving and sustaining success.

What is needed to make this kind of measurement work? Local actors adopt mindset shifts. New ways to measure progress. Commitment to a system-wide problem-solving framework.

A longstanding dream in the homeless services sector has held that a single set of standardized “right answers” might be enough to solve the puzzle of homelessness. But homelessness is a dynamic problem that cannot be solved with a fixed recipe. Like any complex problem, homelessness is a series of problems to be solved. New people experience it over time, and the phenomenon itself changes with the intersection of homelessness and other unpredictable events and conditions; the opioid crisis being only one. The data and tools available to communities have been too slow and cumbersome to respond to such a rapidly changing problem. Typically, data on the number of people experiencing homelessness has been gathered on an estimated basis just once a year (called “point in time data”), but it is an unreliable method for measuring a problem that “requires a video, not a snapshot.” Built for Zero introduced a revolution in measurement, to drive it to individuals, by name, and evaluate the effects of interventions in real time.

“If you want to lose weight, you don’t weigh yourself once a year.”
— Rosanne Haggerty

Built for Zero has a well-documented, rigorous process from “readiness” evaluation for new communities to continuous support through training and learning sessions with peers. A key takeaway is that measurement is an integral part of the process, providing feedback every step of the way.

The Role of Measurement

Real time data is used to monitor current conditions including a by-name list of people experiencing homelessness, and the data collected drives the design solutions. Measurement is integrated throughout the process to evaluate the effectiveness of interventions. Finally measurement is used to track the sustainability of a community’s success in ending chronic and veteran homelessness, not simply whether they can get to zero, but whether they can sustain it in continually fluctuating conditions. 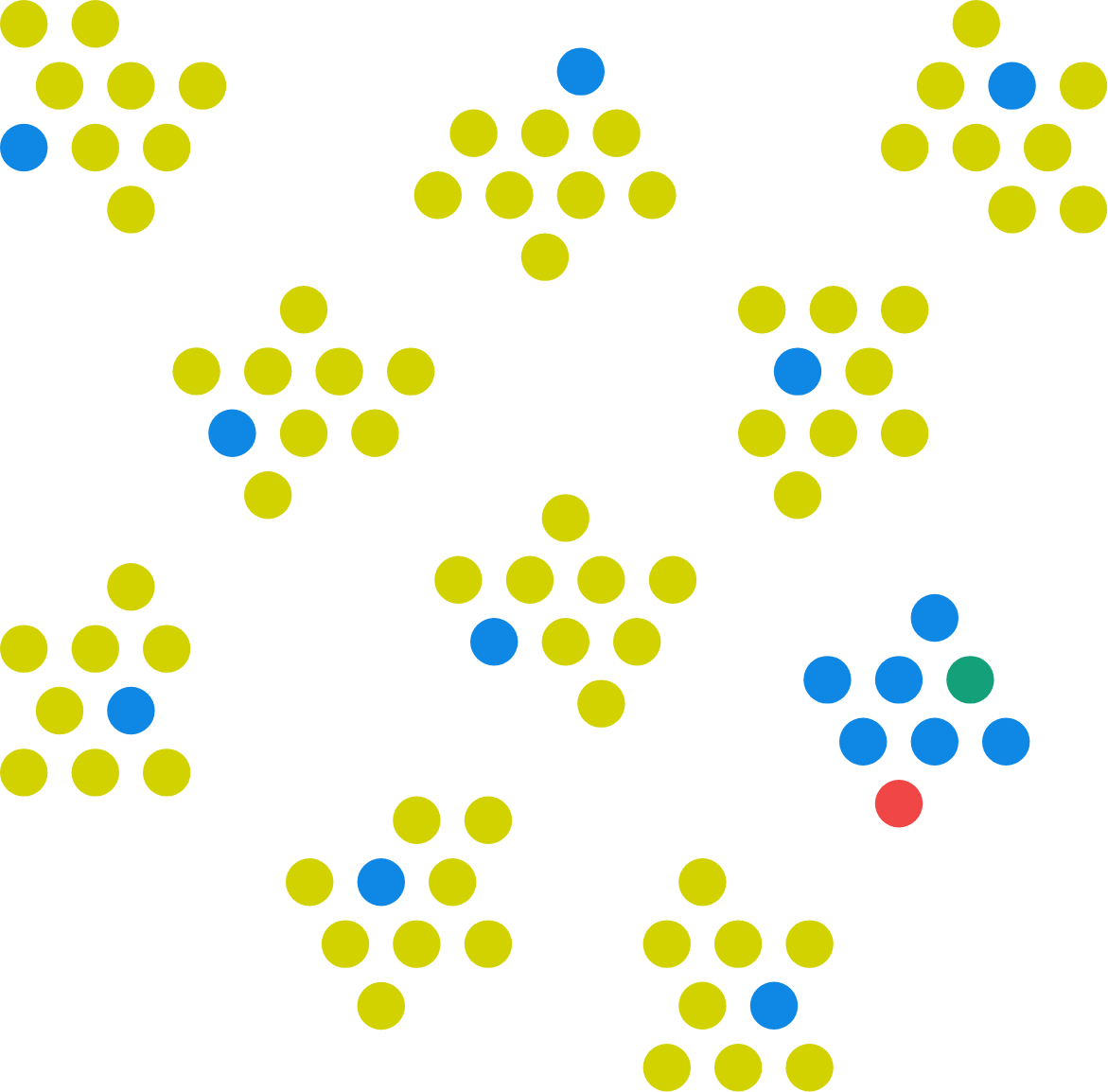 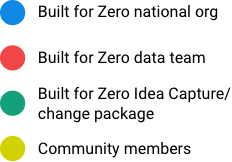 Built for Zero is comprised of a national organization, including advisors assigned to each of the Built for Zero communities across the country. Through these advisors, and through twice-yearly learning conferences, communities members learn how to apply the design process to solving problems in their Continuum of Care. The national organization includes a dedicated team whose job is to gather data and maintain the community dashboards, as well as a person whose job is to capture and publish best practices in the form of “change packages.”

Seventy four communities to date. “Community” is defined by HUD as a “continuum of care” region. Sometimes it’s an entire city, in others a county or larger region. 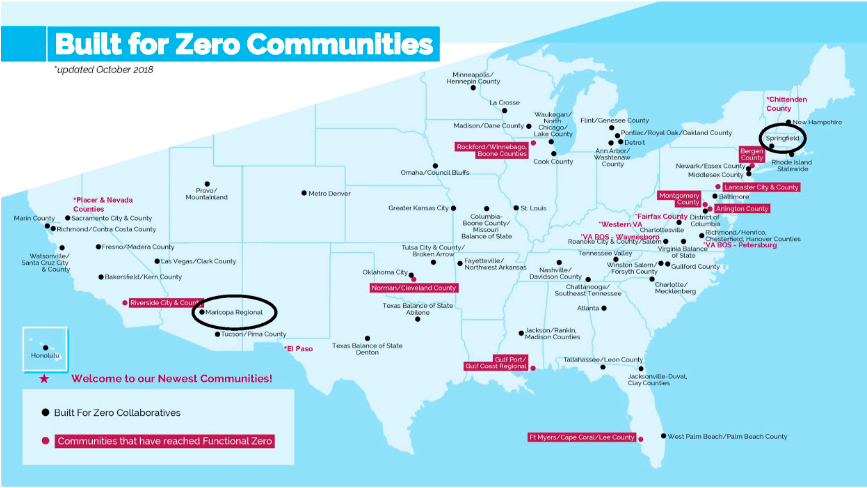 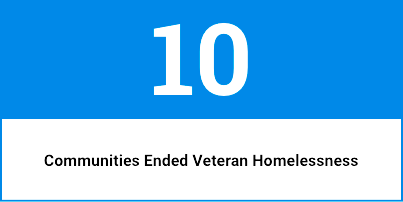 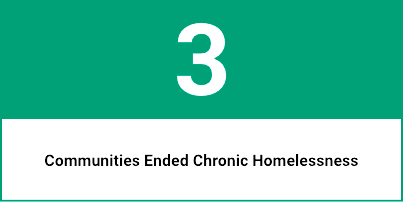 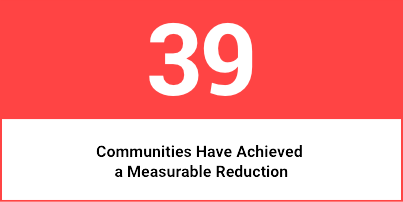 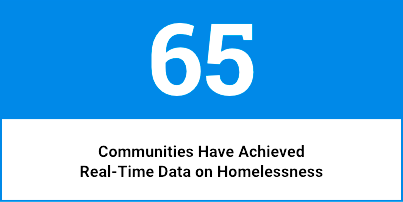 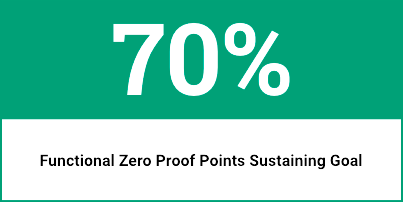 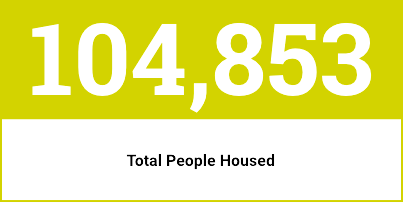 Having a home is critical for health and wellbeing

The process is done “with,” not for communities, and it is based on inquiry rather than imposed solutions

Value and recognition of Individuals, in communities and among people experiencing homelessness

Data is kept confidential among local agencies, not shared with the national community 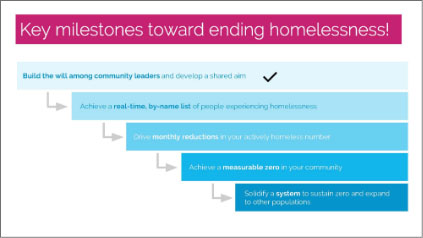 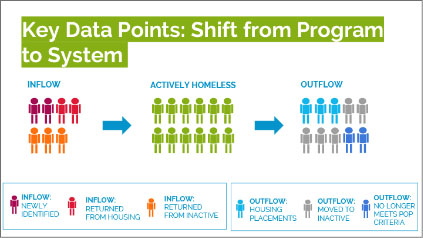 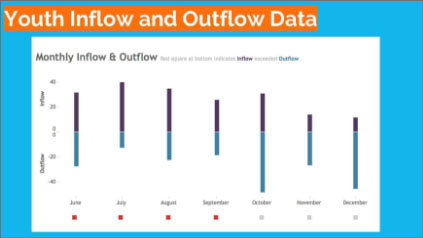 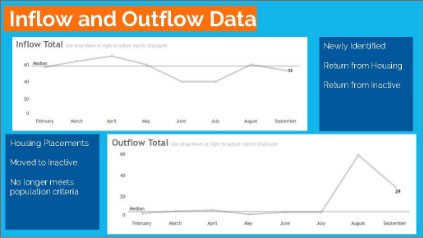 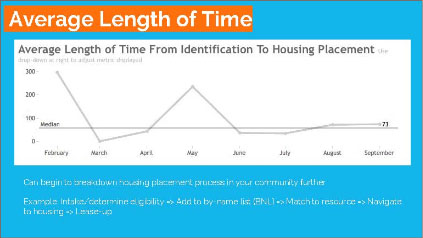 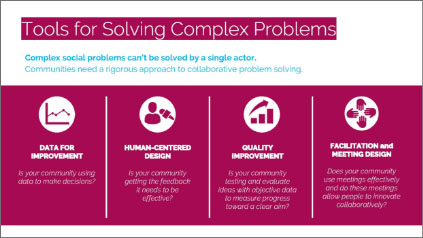 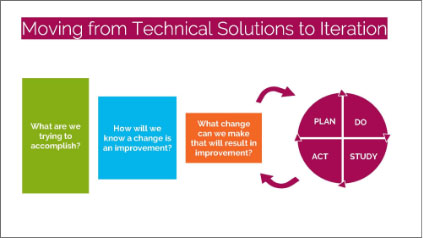 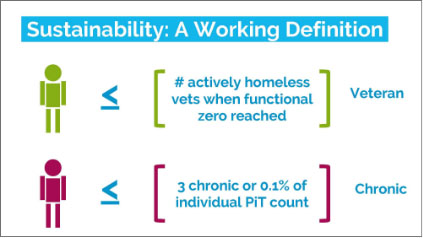 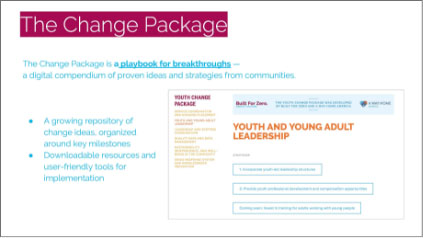